About a thousand years ago when I was prepping for this trip back in Toronto a helpful fella at a bike shop near my apartment pointed at south western Saskatchewan on a map and talking about prevailing winds said "Man you're gonna cry when you get there." Well I'm in Swift Current right now but those aren't tears ... I got something in my eye alright?

Okay well it's not as bad as all that but a mean headwind can sure make for a slow day. I've been on the road eight hours today and covered just under 50km. The terrain out this way has gone from every direction reminding me of The Wizard of Oz that Manitoba and eastern Saskatchewan offered to every direction reminding me of a Wile E Coyote cartoon. Oh yeah and I witnessed an honest to goodness stampede! A herd of cattle grazing near the highway as I passed just up and decided to haul ass for no reason I could see. Scared the crap outta me, but cool to see up close. No idea what would compel a person to try to control that though. Maybe cowboy hats do something bad to cranial blood flow?

Among many things I totally missed in school I'm thinking there was something about there once being an ocean out here in one of those lessons. This isn't snow, it's salt, and there's tonnes of it out here. I also found sea shells at my camp site last night which I'm pretty sure weren't driving through.

Anyway I should be crossing into Alberta on Monday and arriving in Calgary sometime late next week. 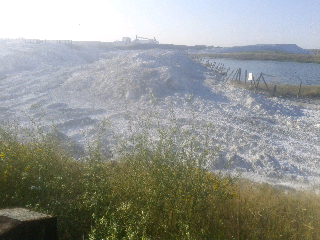 I arrived in Calgary on Friday the 24th of August, in what was decidedly the worst weather I've encountered…

from the Peg to Regina

I left Joel and Tammy's place just outside Winnipeg last Sunday and yesterday I arrived in Regina, that's 641km…