I had to install a Microsoft OS recently so I could get remote access to work.  That being the case I got some Windows 7 action going and for the most part, I don't hate it.  It's got a couple MS type irritations; having to screw around to load an unsigned driver was annoying but at least I understand why they did that.  What I have yet to understand is the Windows undying devotion to the QWERTY keyboard layout.  Yeah it's the most common but there's no shortage of alternatives, and while MS seems to understand people want the choice of something else, they also seem to really want users to hang on to QWERTY despite their stated preferences. 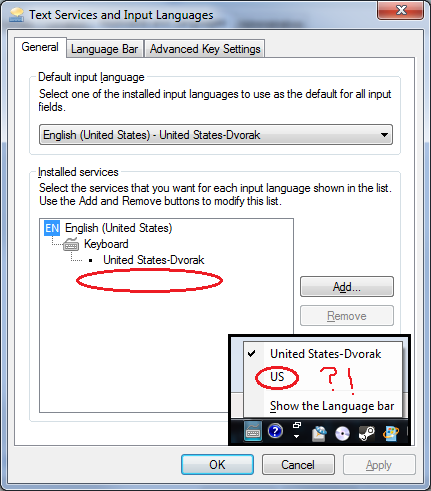 For reasons I can't explain, no matter how completely I remove the US QWERTY keyboard layout, it still shows up in the language bar.  So I hide the language bar, no big deal right?  Except no matter how many times I disable the hotkeys for switching input languages I still randomly find the keys switching back to QWERTY under my fingers without warning.  I've locked myself out of my VPN access to work twice now and at least one website by unknowingly mistyping passwords when my fingers were hitting what I thought were the right keys but which Windows had shuffled on me.

I booted up Ubuntu so I could show a screenshot of how it's done properly, but it seems there is nothing to see.  Yeah because when you have only one keyboard layout selected, go figure, the language bar hides itself and the hotkeys disable themselves.

I'll update this if I figure out how to fix things, but in the meantime suggestions are welcome.

my system for managing passwords

The perils of password reuse, though known since time immemorial, have been making headlines lately. I would guess that…