I recently read on the Pirate Party of Canada forums that the EFF has begun accepting donations in the form of Bitcoins, a form of digital currency that's seen some steady growth of late.  I read a little about Bitcoin when it popped up in my newsreader in the summer but having little understanding of either cryptography or economics my interest wandered quickly.  When I read through the replies however it seemed some people had strong concerns about such a currency being widely adopted, and one vocal protester seemed well informed on the subject so I began "discussing" it with him.  My mistake. 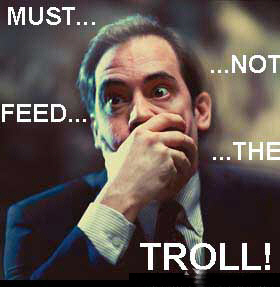 (the troll, do not feed it!)
After a bit of back and forth it became clear that my troll was either unwilling or unable to provide a sound argument for any of his positions that didn't eventually fall back on ubiquitous corporate evil doing and one world governments.  Still interested, I took my curiosity to another forum I frequent hoping to find some well reasoned opinions on the matter.  During the discourse that took place there I was directed to an interesting paper describing the failure of gold backed currencies, educated about the Nixon Shock, and the foolishness of engaging trolls.  (A friend who works in parliament messaged me on Facebook later to advise I run and don't look back "They're all kooks. Flee!").
Normally the story above wouldn't wind up here, but I've included it because since then with a bit of economy on the brain I've been paying more attention to such topics while surfing.  There seems to be a lot of interest in alternative open economic models lately that strike me as interesting if a bit over my head.  For the curious, here's a brief overview of some of the concepts, a short video about money, wealth, and creation of value including links to several projects in the problem space, and a free book + wiki "The Wealth of Networks" about the influence of social production on markets.

Also worth checking out; DYNDY.  I still haven't worked out exactly what it is, but they seem to be sniffing out and examining all manner of alternative and complementary currency systems.  Check out this post for an overview of a presentation about themselves at a recent conference in Amsterdam.

I really have no idea what all this buzzing might mean if anything, but I do find it intriguing. If you have any suggestions about reading material pertaining to backed vs fiat economics or alternative models please drop a comment. I am vastly under informed on the topic and would like to change that.

I had to install a Microsoft OS recently so I could get remote access to work.  That being…