I picked up this novel Accelerando by an open source pundit called Charles Stross. Its some of the most bleeding edge sci-fi I've been lucky enough to stumble on in ages. I fully endorse the story despite a somewhat weak finish (maybe I missed something?) for the shear volume of mind bending concepts and massive scope. The story spans multiple generations, technological revolutions, light years, and eventually realities. This is where Neuromancer could have gone if Gibson had the DMCA, the GPL, Aibo, and a copy of A Brief History of Time to draw on. 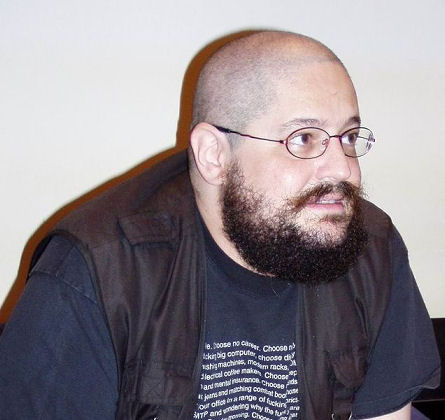 (as seen on wikipedia)
As you may expect Stross sports some pretty forward thinking views on current technology issues. In a recent interview he talks about copyright and patent law ...

"There is a fundamental contradiction at the heart of the term 'intellectual property,' because information isn't transferred between brains: it's copied. The music and film industries are finally waking up to the fact that as they squeeze their product range down, people lose interest in the range and look outside it for independent productions. So they're panicking, blaming the new business model, fighting a zero-sum rear-guard action, and trying to ban progress."

If you like science in your fiction, grab this one to read over the holiday. Even better if you know a geek who's into any of the above gift up for easy geek cred.

view from the cube