My cousin David emailed the fam recently to announce his departure from the world of the slaggin it for a wage into the land of self employment. One of the directions he's opted to move in is to market his photography skills, starting with several collections of photos gathered during his travels. Most of my exposure to his photo albums has been family history related, so it was a nice change to get a look at some of his more artistic work ... 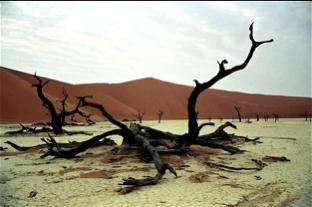 (a shot of Namibia from Davids Africa series)

I got to thinking that I'm pretty well stocked in the friends with cameras department, and more than a few of them get to some interesting locales. My buddy Matt spent a year in Tokyo with his girlfriend a while back, teaching English and learning to hate ducking. He's back in the Great White North as of last year and back at school but his pics still lurk in the tubes.

My friend Paul currently lives in Tokyo and also has some shots of the city as well as several collections of Japanese parks, mountains, and the obligatory pagoda shots over at his Flickr account. He also gets a fair bit of travel done in the course of his work and posts pics as time allows. His recent set of shots from Sydney show some interesting Eastern architectural influences there that I was completely unaware of.

On the local scene my friend Mike keeps a running tab of his photos of friends, trips, and of course Toronto at shadowfind.ca. He'll be doing some traveling in the spring and is looking into an underwater case for his cam so stay tuned for more goodness.

Also both my parents have amassed a decent collection of JPEGs in recent years, Mom having picked up a nice SLR to match her journalistic tendencies and Dad keeping his cameras handy while flying at some fairly exotic locales for a geophysical survey company. However since neither of them have embraced the magic of the interwebs I have no links to offer ... (hint hint!)

More Canadian than syrup!I was pleasantly surprised this week to hear from my brother Terry that he's gotten…

Wish I'd heard of this on Friday when trying to decide what to do after work. Instead of messing…