It's been an eventful day and I've had a lot on my mind. Without getting too ranty (I hope) here's a scorecard for Toronto with only two grades, win and fail.

1. I had to be in the office at nine this morning to help implement a fix that corrected among other things something called a "revenue leak". I've helped fix memory leaks before, security leaks, even a leaking brake line once but some sort of money leak was a new one for me. The fix only took a few hours out of my day and had me leaving the office in time to meet a friend at a patio to enjoy some sunshine and cold beers.

2. My friend wanted to meet at a bar called the Black Bull on Queen street near John, close enough to work to walk it and in a beautiful location for catching rays and watching skirts the world go by. Unfortunately a great location and large patio are about the only things the Bull has going for it.

I've lunched there plenty of times due to it being so close to work, but the service there is so abysmal I could never make it back to the office in a reasonable amount of time. We started going to lunch in strategic crews, one group to get there early, get a table, and place our orders. The other group would arrive about twenty minutes later (usually just as the food was arriving) to eat, collect money from the first bunch so they could get back to work and then wait for the bill (another eternity).

I don't know who schedules the wait staff at the Black Bull but to them I say this: the crummy food and expensive drinks would be far more tolerable if they arrived quicker (and in the case of drinks more frequently).

Today's trip was no exception, with the added bonus of a good half hour wait to get on to the patio and an extra beer on our bill that we didn't order or receive.

3. Fortunately good company and cooling weather were on my side so my friend and I decided to wander down King street towards his workplace to maybe get a coffee and finish our chat before he had to punch in. However on the way there during maybe a twenty minute walk the sky blackened into a Neverending Story-esque cloudy "nothing". The wind whipped up a gritty wall of dust that had people blinded and scurrying into doorways and alleys to hide. The heavens opened and projectile vomited fat angry drops on us as we hurried to find shelter. The diner we wanted to take refuge in was closed on the weekend (at King and Portland something closes on the weekend!?) so I was forced ... Lord forgive me, to enter a Starbucks.

Since I subscribe to the Dennis Leary theory of coffee; it doesn't need a menu, it needs a CUP, and the "could I just have a large plain cup of coffee pretty please, no I'm sorry I don't speak Italian" coffee they serve in Starbucks tastes like it was brewed in someones colon I opted for a cold drink. Of course they don't make that a simple affair either since all the bottled beverages including the water have such bizarre names and so much writing on the labels I couldn't be sure if I was getting juice or shampoo I opted for a soda water. It didn't completely suck.

Also they were playing some Lady Day which was quite acceptable and did much to combat what the raging storm was doing to my nerves. Wasn't enough to swing the vote though.

4. As we were getting ready to leave once the storm died down and my friend was heading off to work I decided I wanted to see a movie. I'd read a favourable review earlier in the week for State of Play so I opted to give that a go. My friend, being a journalist, suggested I check the show times in a copy of the Star that was sitting nearby but someone had punked the Entertainment section. "Just buy a copy then", he said.

"Screw that, I can get a Now magazine for free!"

"Damn it Rob you're the reason I'm not going to have an industry to work in you know that?"

I bought a copy, something I haven't done in ... well ever I think.

As it turns out the movie was playing at the AMC at Yonge and Dundas, so I hopped the TTC and continued flipping through the paper. To my pleasant surprise there were plenty of interesting articles to keep me occupied including some details about the TTC's new streetcars which I'd only heard a little about and a pretty cool experiment involving fake lost wallets. Even the business and political sections which I often skip since they seem to always reference about a dozen things I haven't got a clue about seemed more slanted toward both educating the reader as well as providing detail on current events. Yeah you heard me, I got my learn on!

I may even buy another one. 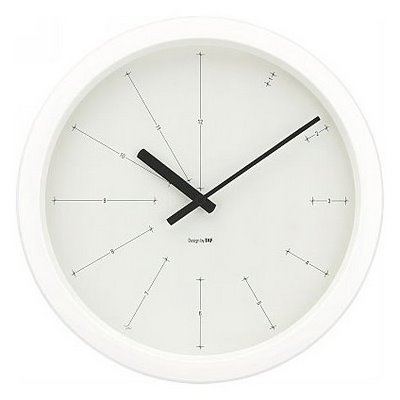 Have you seen this face Toronto?

I've always hated wristwatches, they piss off my arm something fierce. Since I never wear them I grew accustom as a youngster to simply keeping my eyes peeled for timepieces wherever I was. (Credit where it's due: thank you Herman The Mall Philosopher) I also don't carry any gadgets with clocks in them so this habit has stuck with me even in recent years. I've noticed though that the number of visible clocks in public spaces seems to be dropping off considerably. Maybe businesses just assume that everyone has such a time telling gadget like a cell phone or an atomic cesium clock on hand at all times. Or maybe they'd rather not remind everyone that it is getting kinda late and don't they have other things to do today that don't involve parting with their money? 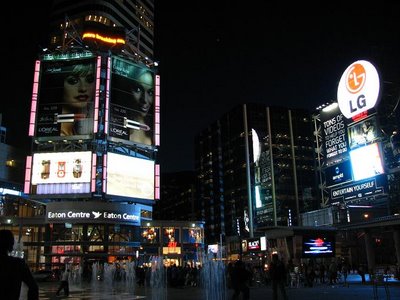 Either way I managed to stand at the corner of Yonge and Dundas, arguably the loudest, most heavily traveled, blinkiest and beepiest, most advertised and big-screened intersection in the country for TEN MINUTES before one of those screens was kind enough to give me the time of day. I did however see the trailer for this steaming pile of crap about sixteen times on almost as many different screens. I have no idea who that guy is in the trailer but now I want to punch him in the face too.

6. I finally determined the time and got a corresponding ticket for my movie. And no, before you ask there was no clock visible anywhere near the ticket kiosks or the box office. Showtimes for 24 screens were clearly displayed everywhere. Current time? Who the hell knows.

I snagged my overpriced popcorn and ignored the scornful gaze of the half dozen security guards scrutinizing my prized copy of The Star tucked neatly beneath my arm. "Is there a video camera hidden in that ancient information medium!? Ye Gods stop that man before he makes yet another blurry copy of a movie that's already been cammed and released online!".

As always my favourite place to sit was available, I don't think I know anyone who's ever agreed with my various reasons for loving to sit front row center at the movies. The lights dimmed, the curtains pulled back, and wonder of wonders ... I bore witness unto actual movie trailers! That's right, somehow the audience wasn't subjected to commercials for perfume or cars or soft drinks or some new CD or the morning after pill or anything. For some reason movie going fans were given suggestions of actual other movies they might enjoy and right afterward were treated to a screening of the very film they had payed to see. It was downright canny.

I don't know if it was an accident. Maybe some scrawny teen aged projectionist got canned tonight for skipping the deluge of sexy people doing things so hip and random you can only be watching a jeans commercial. Maybe it's this "economic downturn" I read all about in my very own newspaper today. It sounded bad then, but if it means that Pepsi can't afford urinate their logo waste into my eyes at the movies anymore then I say let the crash and burn keep burning!

Alright Toronto, you may have tied it up this time but tomorrow is another day and I wanna see a better team effort out there okay? Let's see that hustle next time and try to keep the fail where it belongs.

zombies are awesome but ...

An actual MSN conversation between a friend and I at work today. I'll let you be the judge.My,…

Until I'm able to section off a chunk of grey matter, format a filesystem on it and mount it…