Not really, it was actually just my wallet.

Last week I visited San Francisco for the first time. I was there for work and those obligations consumed the bulk of my time but I arranged to spend a couple extra days in town to play tourist. Friday was the first day I had free so I did the typical stuff. Walked the Embarcadero. Stuck my nose in touristy shops. Ate greasy food. Checked out Pier 39. Took a photo of the golden gate bridge.

Walked up and took a look at Lombard street, said "fuck that" and went elsewhere.

That evening I met an old colleague for drinks at the Adler Museum cafe in North Beach, a fantastic dive. I also drank some wretched stuff the locals drink called Fernet, it was awful. Stay away from it.

After he went on his way and another coworker who had spent the afternoon wandering about with me headed to the airport to fly home I set about tackling one of my favourite things to do in any city, but specifically a new city. Finding a bar to knock back some drinks and make friends.

I wandered into Buddha Bar in Chinatown, ordered a cocktail and a shot, and struck up a conversation with a couple visiting from Florida. We tried to make sense of a crazy game called "Liars Dice" the bartender was teaching anyone who seemed interested. After they left another group of folks sat down next to me and started playing. We chatted. I ordered more shots and cocktails. They invited me to join them in crashing some party at a nearby hotel.

I accepted. The night was starting to get interesting!

I recall walking some distance to this party. It turned out to be a fancy halloween party at a really nice hotel. I was very underdressed but it didn't seem to matter. The details of this party are somewhat obscured at this point by the copious rounds I'd been sharing with my new friends. I recall talking to a woman dressed as a bird and a guy in a gorilla suit buying me a glass of some scotch that seemed ludicrously expensive.

At some point I decided to say goodnight and head back to my AirBNB. Outside the hotel was a queue of cabs, I grabbed one and left.

In a brilliant stroke of luck, at some point in the evening I had bought a drink with my credit card and slid it into my hip pocket instead of back into my wallet. When the cabbie realized I had no cash to pay him he took me to an ATM at a grocery store to try to get a cash advance. My Canadian card wouldn't play ball with the American ATM.

The cabbie left me there.

I'm not exactly sure why I went back downtown at that point, maybe I was hoping to find the hotel and try to locate my wallet. Maybe I could get into the office and crash on a couch. At any rate I had no idea where I was or where my AirBNB was and for some reason I aimed for the biggest buildings I could see and started walking.

For two hours (more on how I know that later).

Somehow I wound up on Russian Hill back in North Beach, then I wandered downtown. My phone was dead by this point. I was sobering up and exhausted, I'd walked almost 20km that day. I started to try to decide by what criteria I should select a doorway to pass out in.

I spotted a guy standing around outside a fast food joint with some friends looking at his phone and in a moment of desperation I approached him and asked if he could look up directions to where I thought my AirBNB was. He graciously did so and informed me it would be a fifty minute walk back to Potrero hill.

He then did an amazing thing and hailed me an Uber and sent me safely back to sleep the night off. I recall only that his name was Sean, I owe you big time man, thank you! I reached out to Uber to see if they can figure out who this generous soul was so I can throw him a few bucks for saving my tail. If they work it out I'll update this post.

Hungover the next morning I set about calling and cancelling all my cards. I also cracked open my laptop to check in for my flight home that evening but found I wasn't able to. I double checked the booking.

I'd missed my flight home. It was actually booked for the night before. No idea how I bungled that one.

In the middle of calling the bank back to desperately ask them to un-freeze my now locked accounts so that I could try to get a new flight, the host of the AirBNB knocked on the door to tell me I'd stayed far past check out and she needed to clean up for the next guests.

It is fair to say that at this point I was freaking out.

I apologized and threw on some clothes, grabbed my bags and was out the door in minutes. I wandered to a nearby diner to sit down and make a phone call and ask somebody for a really big favour.

I called my mother. "Hi Mom, I'm in trouble. I'm trapped in a foreign country with no money. Want to buy me a flight home?".

The conversation evolved from there but we hit a snag trying to purchase the flight, some anti-fraud thing was mucking things up.

He and his wife sorted me out and I made it home later that day. Thanks you guys, I owe you big time!

After a quick change and a shower at home I headed out to a Halloween party to tell the story of the unfortunate and mysterious night out. Lots of questions came about that I didn't have answers to. Who were the people who'd brought me to the party? What hotel was it in? Where had the cab dumped me?

I realized today that I might have some photos in my phone from that night, possibly even geotagged. I checked but all I had were a few blurry shots of the Buddha Bar. 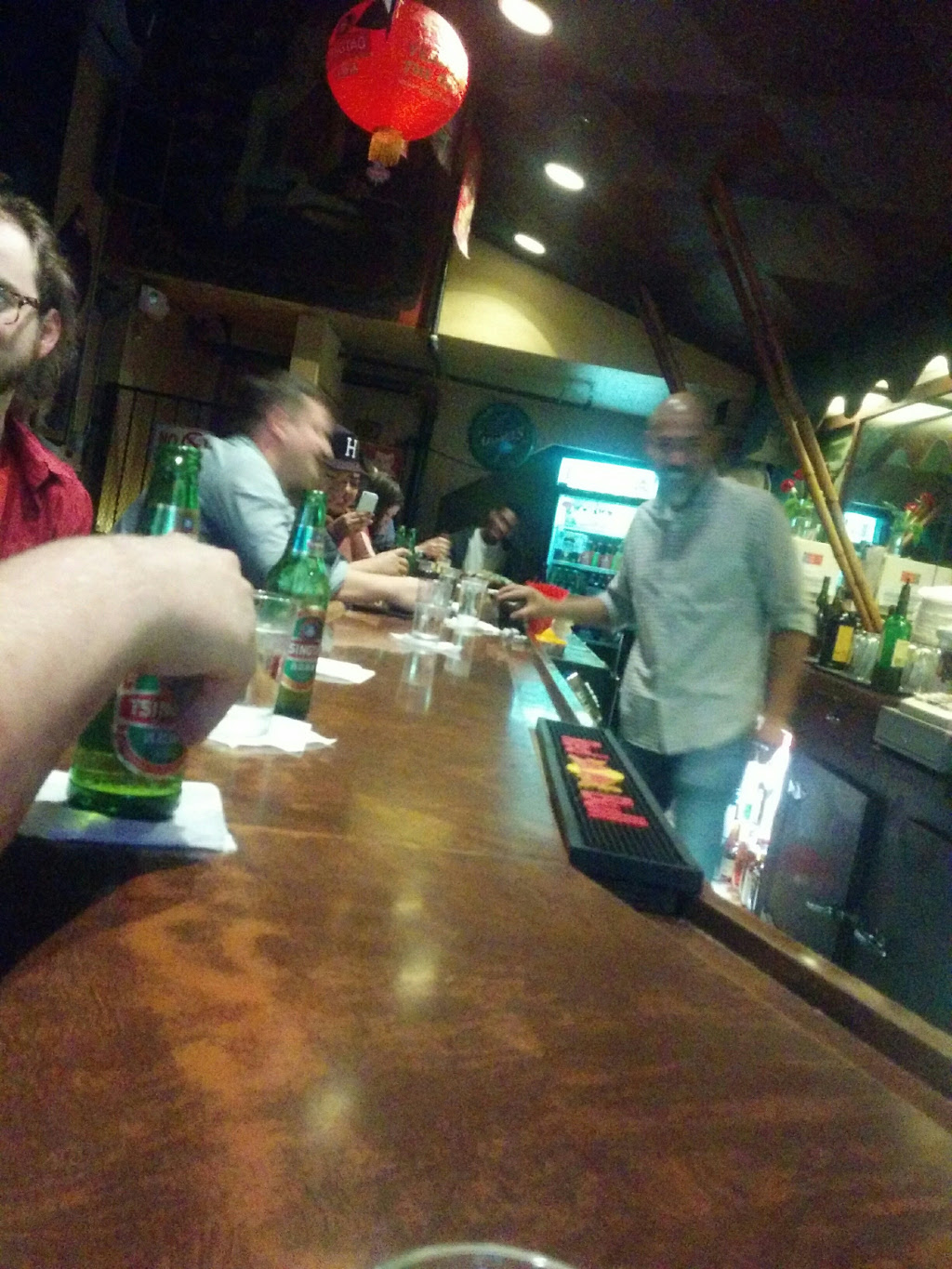 It occurred to me though that Google might know where I'd been, and it turns out it did. Google location services was turned on in my phone so there's a detailed log of my movements.

Here I am walking from Buddha Bar to the fancy party, as it happens my memory of that was pretty accurate. The Fairmont San Francisco is a beautiful hotel! 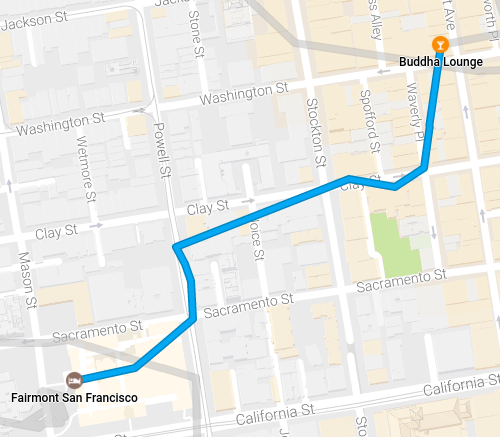 Here's me about an hour later in a cab, turns out he did take me to where I was staying and then mere blocks away to try to get some cash.

Once he abandoned me there (I do feel bad about burning him on the ride) if I'd known where I was I could have walked back in minutes. Instead here's what I did for the next two hours. 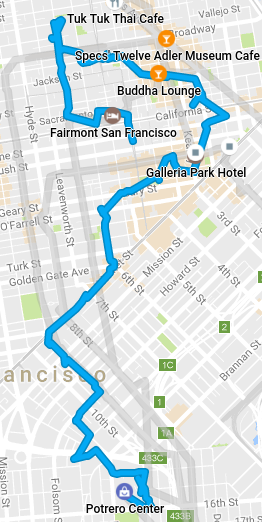 Yes I did wander mindlessly through the infamous Tenderloin in the wee hours of the night despite being repeatedly told to stay out of it. Nothing interesting happened though, another stroke of good luck.

It turns out I actually fairly faithfully retraced my steps. Never did find my wallet, I called the Fairmont today. No luck there either. Ah well. I got a wild story to tell at least.

If you want to see what google knows about where you've been you can try it out for yourself.

sqlite to mysql with less jank