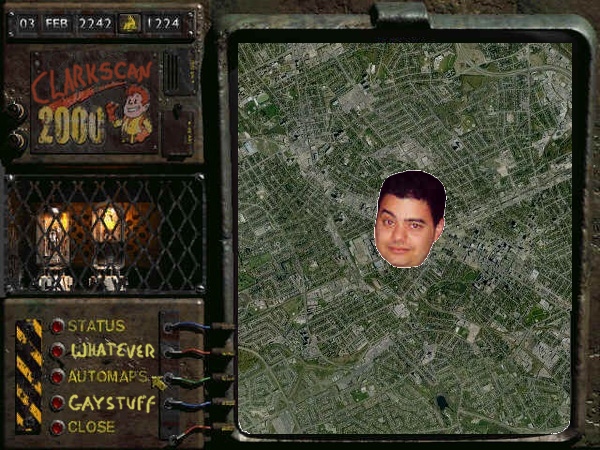 As is often the case, a recent thread on a forum I frequent degraded into a playground of hastily created goofy images of my friends, including this "prototype" of the Clark Scan 2000. Besides reminding me that I need to book some vacation time for the release of Fallout 3, I recalled a conversation I had about my friend Joe who is damn near impossible to keep tabs on.

A bunch of us were debating whether to start a new round of hold 'em or wait to see if Joe would show up. Being a U of T student and living on campus he has no direct land line of his own to speak of, and the student budgeting means if you try his cell outside of the free evenings-and-weekends range you'll likely just get the machine. The discussion went from cowbell round the neck, to hired stalker, to high tech pretty quickly. We decided that the few hundred bucks a year that a GPS Joe tracker would run us wasn't worth it for poker purposes, but between his family, friends around the city, and some 300 facebook friends we might be able to cover the costs with a pay to play google mashup (wherethehellisjoe.org.com.net.co.uk?) that charged like a buck a month to be able to keep tabs on the wandering yarn spinner.

I pitched it to him when he eventually showed up that night (he missed the game by several hours) saying that I'd set it up and have it pay for hosting and GPS locates and he could keep any profits. Hard to say no to "free" money, but when your privacy on the line its not surprising he had some reservations. It's impossible to guess how much extra cash something like that might earn a person, but how much would be enough for you?

I might do it for say, a couple hundred a month, but I'd probably wanna keep close tabs on who was subscribing too. Not a bad idea actually, hey Joe how about you get a veto vote on anybody who signs up to use the site?

joost, bandwidth, and the intertoobs

What the hell joost, you were cool while I knew ye ... For the past couple weeks I've been suffering…

my corner of the citySo the move is pretty much behind me. I'm unpacked and pretty much settled in…