As a long time fan of the original games, I like many others have waited with palpable anticipation for Fallout 3. But since I haven't really played any PC games since Counter-Strike had to be copied into your Half-Life folder manually, my desktop isn't really up to the task of playing a modern 3D game. However since Fallout 3 has been released on a couple next gen consoles as well it occurred to me that I might save myself a some bucks by spending only a few hundred on an Xbox 360 instead of well over a thousand on a new gaming rig.

Like a lot of oldschool PC gamers however I just can't give up my keyboard and mouse for a joystick when playing things like first person shooters or role playing games. As a southpaw many FPS games that don't feature a stick-swap option are completely unplayable for me anyway. I keep running into corners and pointing my gun at my feet or the sky. But no problem I thought, Microsoft makes Xboxes and keyboards, should be pretty easy to get them working together right? Nope.

The only keyboard officially supported on the 360 is the piddly little add on that snaps onto the controller for chatting purposes. Kinda hard to get my WASD on with this ... 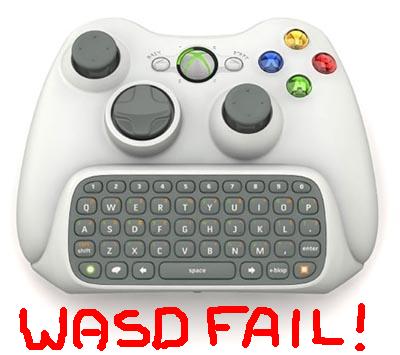 I guess that flowchart was right all along.

overheard at the bar

I would never ask you to like my music, but if you do that's just fine with me."I'm…