Did you know that the woman who played Vasquez in Aliens also appeared in Fear and Loathing in Las Vegas? Remember when Benicio and Johnny tackle the maid and "hire" her as an informant for some deranged government plot? Well Alice the Maid is the same ass kicking Jenette Goldstein who in Aliens when asked by one of her male comrades "... have you ever been mistaken for a man" uttered the classic response: "No, have you?" 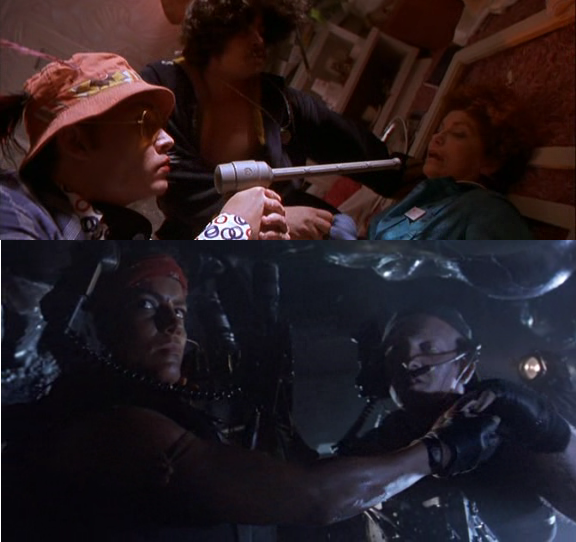 I can't remember when I first noticed that, no doubt I was referencing the Aliens IMDB entry to improve my score on some highly prestigious Sigourney Weaver trivia contest. If those flicks arent't enough for ya, she also did a brief stint as the T1000 in Terminator 2 (remember the milk carton?) and is credited with an appearance in an episode of Max Headroom.

So with all this geek cred how does Tress MacNeille stack up? I've dug deep into that oracle of all knowledge worth knowing, the Wiki ( if-its-on-the-internet it-must-be-true ) pedia to find out, and her list of voice acting accolades is truly epic.
First off she plays countless characters on The Simpsons, and Futurama including Crazy Cat Lady and Booberella. She voiced a segment of The Animatrix, and portions of the English release of Princess Mononoke. A little ways back she was also the Warner sister Dot, as well as Hello Nurse and Babs Bunny. She's featured in episodes of Pinky and the Brain, Harvey Birdman, Freakazoid and the (admittedly not fantastic but quite geeky) Dilbert animated series. Dipping way back into the oldschool toons her name even adorns the credits of the English Voltron (think Thundercats or Power Rangers but older). All classic geek fare but surprisingly it gets better!
It turns out she's been working in the game industry since the time when hiring actual voice talent was a decadent luxury for most game studios. She worked with Mark Hamill doing voices for the classic LucasArts SCUMM VM game Full Throttle. A game which shipped with so much custom voice content that I had to pick up some "new" hardware to install it; a CD-ROM! Since the SCUMM VM is right up there with Doom, an ASCII video player, and MAME on the list of things to port to various obscure hardware platforms you can no doubt enjoy Tress' Full Throttle work on your linux watch, iPhone, or in-flight media center.
Of course if you're not that geeky you'd just have to look as far as Clayfighter, or Run Like Hell, two wide reaching console games to sample her vocal stylings in game form. Then again if you are that geeky you can go get your copy of Weird Al's debut album and check the liner notes. She's credited as "Lucy" on the track Ricky.

And then we come to my favorite bit. The Fallout bit. Fallout is a piece of modern culture not unlike Radiohead, The Smashing Pumpkins, or Monty Python. Nobody who likes any of these things feels moderately about them. It's die hard fan or nil, and when it comes to Fallout I'm a fan for life. Tress MacNeille voiced Jain in Fallout and Tandi in Fallout 2, which is just one more reason real geeks love her.

h'okay: so this guy has this paperclip

Well despite my heartfelt emails Santa brought bills this year instead of a nice flatscreen TV. So I threw…