That's what I heard when I mentioned to some co-workers today that I'd spent some of Sunday afternoon wandering Church St and taking in the spectacle that is the Toronto Pride Parade.

"Why do they always do it so early in the summer? I can't believe I missed it again!"

Well I had no answer to that. What's one weekend got over another, really, as long as the weather behaves? Turns out there is a reason it's held on the 28th of June and a damn good one at that, it's the anniversary of a 1969 Grenwich Village riot that broke out when a bunch of police stormed a gay bar and proceeded to arrest people for cross dressing, not carrying ID, or to paraphrase; being gay in public.

"Standard procedure was to line up the patrons, check their identification, and have female police officers take customers dressed as women to the bathroom to verify their sex, upon which any men dressed as women would be arrested" 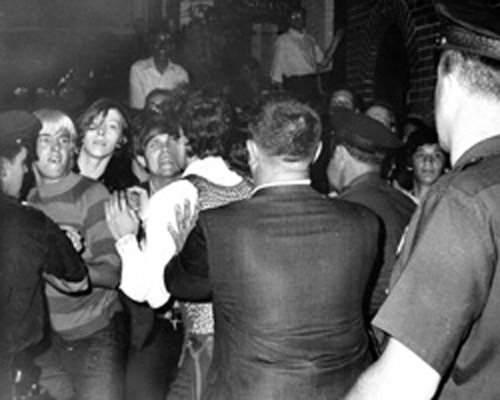 "We all had a collective feeling like we'd had enough of this kind of shit. It wasn't anything tangible anybody said to anyone else, it was just kind of like everything over the years had come to a head on that one particular night in the one particular place, and it was not an organized demonstration ... "

I'd never heard of this until I perused this Toronto Star article this morning covering NYC's Pride, but after some googling I also found this New York Times piece by a writer who was present at the 69' riots which both clears up some facts and dispels some rumours about the event. He goes into more detail as to what the police were doing there in the first place and how the (then tiny) established gay community reacted.

Anyway, the wikipedia entry and both articles make for a good read if you're interested, but for the impatient I suggest you make your way to one of the many TO Pride 09' photo collections out there.

Something you probably won't see at Caribana