A couple weeks ago I pulled a flick called "The Man From Earth" off the newsgroups and gave it a watch. It was a low budget Sci-Fi picture with some vaguely familiar faces (Enterprise's Dr. Phlox) and an intriguing hook. A university professors going away party becomes an intellectual Q & A session when the departing prof confesses to his peers that he is over fourteen thousand years old and does not age. 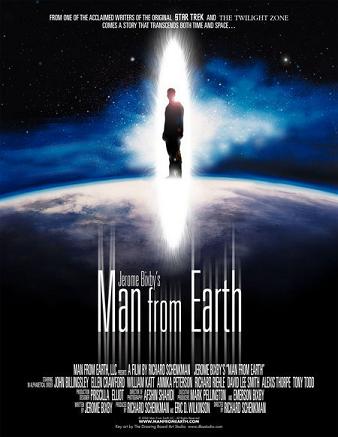 The film does a great job of tackling many of the interesting angles from "immortal" classics like Highlander, and Interview With The Vampire and leaving the action and special effects for the blockbusters. The mechanics of living with immortality present engaging and unusual problems and The Man From Earth handles them deftly without pre-chewing the ideas before presentation. Its no hit, but it makes for smart storytelling and an entertaining intellectual exercise in history and human nature.

Sure I enjoyed the picture, and I certainly recommend it, but the really interesting bit cropped up on a few popular P2P news sites recently. When the DVD screener was ripped and released on the net it was featured in P2P review site Rlslog. It seems the popularity garnered on IMDB and other online movie review sites since the leak was attributed by the producer of the film to its circulation online. He even went out of his way to contact Rlslog and thank them and the community for helping to promote their labour of love.

The creators are of course business men, and not above soliciting a few digital alms from those who pilfered and enjoyed the show. As I have strong objections to paypal I think I'll wait till I can take it in at the theatre, but I applaud their stance. I'm hoping more small budget pictures will consider "pulling a Radiohead" to get their stories out to an audience beyond the Hollywood targets. So lets see a Canadian theatrical release boys, I'll grab friends and put asses in those seats.

muad'dib on the beeb

BBC science news ran a story today about this little fellow called a Jerboa. The article claims that this…

hip hop speaks to me

Of course when I first heard Frontalot, the nerd in me lol'd. But I'm always pleased to run across…